MessageToEagle.com –   Ancient people believed that once you entered this place there was no way out. A very long time ago, there were houses and temples here. Today, everything is buried under the sand. Precious ancient relics are hidden deep under the “Sea of Death”, or the Takla Makan desert.

Archaeologists are beginning to discover some of the secrets  that have been hidden in this mysterious region. Still, it seems that we are only scratching the surface and only time will tell what more wonders  are waiting to be unraveled. The Taklamakan desert is the largest desert in China and it is also considered to be the world’s second largest shifting-sand desert covering an  area of over 33, 700 square kilometers (over 13,000 square miles). In Uigur language, Takla Makan means ‘you can get into it but can never get out’  and that is why the desert is also called ‘the Sea of Death’.

The desert is very significant to the people in this region.

According to an ancient legend, once a long time ago, a powerful Supernatural Being who saw the hardship being faced by the people in this area,  thought that he could help them by using the two magic objects in his possession namely the golden axe and the golden key.

He gave his golden axe to the Kazakh, so they split the mountain Altai and diverted water from the mountains to the fields.

The Supernatural Being planned to give the golden key to the Uigur so that they could open the door of the treasure-house of the Tarim Basin,  but unfortunately his youngest daughter lost the key.  This angered him so much that he held her a captive in the Tarim Basin and thus the Takla Makan Desert was formed.

But Sven Hedin found many remains of houses. Then Aurel Stein, another explorer known as a pioneer of the Silk Road, stayed there for two weeks,  and found the remains of another 18 residential houses and identified some temples. He also found documents from the Tang and Han dynasties.

In 1900, Hedin once again visited the Taklimakan. In this expedition, he found the ruins of the ancient city Loulan, buried under the sand. Zhang said, “The ancient city of Loulan is the capital of the Loulan kingdom, which dates back even further than Dandan Oilik. These two discoveries, Dandan Oilik and Loulan, are signature archeological events in Xinjiang.” 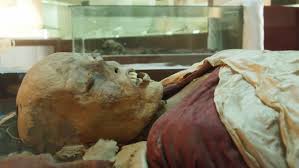 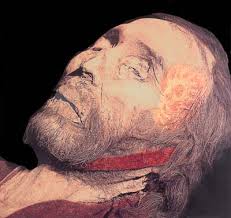 In 1910, ten years after Loulan was found, a local hunter discovered a tomb near a creek 175 kilometers away from Loulan. It was named the “creek tomb”. Built using more than 100 wooden poles erected on a sand dune, the tomb is regarded as one of the most intriguing mysteries  in ancient Asian civilization. Zhang said, “It belongs to the early bronze age, whose history in Xinjiang stretches back to 4,000 years ago. Half a century later, in 1979, a female corpse dating back nearly 4,000 years was discovered in Loulan. The corpse was well preserved, and nicknamed  the “Beauty of Loulan”.

The mummy nicknamed the “Beauty of Loulan”. To the right is her face as reconstructed by an artist

In 1995, ancient brocade appraised as made in Sichuan province during the Han dynasty, was found at Niya ruin in the south of the Taklimakan Desert.  It became one of the top archeological finds that year.

In 2003, during a dig at the “creek tomb”, another well-kept female corpse was found. Also estimated at over 4,000 years old, the corpse still had  beautiful facial features, thick eyelashes, and a visible smile. Her beauty once again stunned the world, 24 years after the discovery of Loulan beauty.  A funeral system involving “reproduction worship” was also revealed.”

Who inhabited this region and what contact did they have with the European continent?

In the late 1980’s, several well-preserved mummies were discovered in the Takla Makan desert.

The perfectly well-preserved mummies are estimated to be at least 3000 years-old. The corpses reveal that the people had long reddish-blond hair,  European features and didn’t appear to be the ancestors of modern-day Chinese people. Archaeologists now think they may have been the citizens of  an ancient civilization that existed at the crossroads between China and Europe

It would seem an entire secret ancient world is hidden beneath the sand. What more surprising discoveries will archaeologists encounter at this  dangerous and mysterious place?

2 thoughts on “Ancient World Buried Under The Takla Makan Desert”